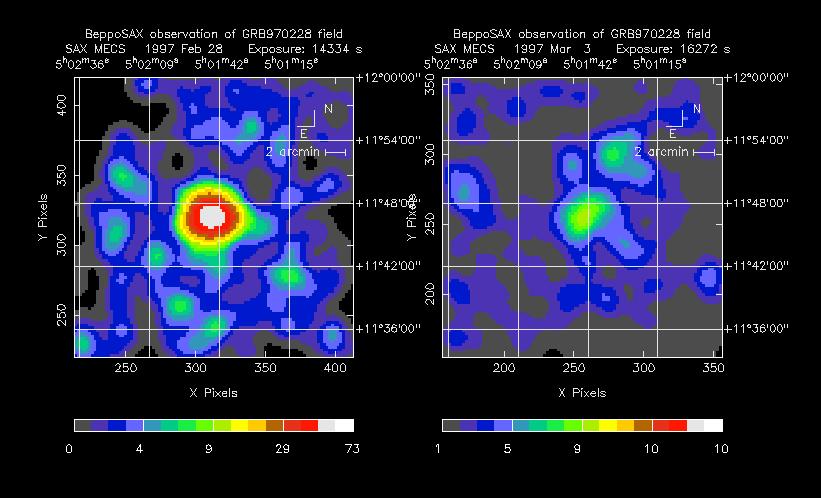 X-ray Afterglow of a Gamma-Ray Burst: The Grail Found?

Gamma-Ray Bursts have remained a cosmic mystery largely because contemporary gamma-ray telescopes have poor spatial resolutions, generally a degree or more, which means that a large are of the sky (with many candidate objects) need to be searched to find the burst counterparts. Detection of a gamma-ray burst at soft X-ray energies, where detectors have much finer spatial resolutions (yielding a much smaller search area) could go a long way to solving this mystery. But until very recently no one knew if these bursts also emitted X-rays; and even if they did, catching the burst simultaneously with a both gamma ray and X-ray telescopes telescopes required difficult coordination between the two instruments since the bursts are so short (typically lasting only seconds or minutes).

The breakthrough was provided by the BeppoSAX X-ray satellite. BeppoSAX is an Italian-Dutch X-ray satellite and carries both a gamma-ray burst monitor in addition to an X-ray telescope. On 28 February 1997, a gamma-ray burst was discovered simultaneously in data from the Gamma Ray Burst Monitor and Wide Field Cameras onboard by the team of Italian/Dutch scientists at the Scientific Operations Center in Nuova Telespazio, Rome. The Italian scientists responsible for the gamma-ray burst detector onboard the satellite (E. Costa, CNR, and F. Frontera, University of Ferrara), in conjunction with the Mission Scientist (L. Piro, CNR) and the Mission Director (R. C. Butler, ASI), were able to reschedule the satellite observations and point the BeppoSAX narrow field X-ray telescopes (the Low Energy Concentrator Spectrometer and the Medium Energy Concentrator Spectrometer) in only 8 hours at the gamma-ray burst source. As a result, an unknown X-ray source, in the constellation of Orion, was discovered and localized with an accuracy of one hundreth of a degree. A second follow-up was performed with narrow field instruments after about 2 days. This second observation showed a drop in the source flux by about a factor of 20, suggesting that this transient X-ray source and the transient gamma ray source were one and the same. The X-ray pictures taken during the two follow-up observations are shown in the figure above. The X-ray afterglow of the GRB is the strong source in the image on the left which appears much weaker in the image on the right. Thanks to the precise position determined from the X-ray counterpart, subsequent observations in the radio and optical have strongly suggested that this GRB is associated with a star-forming galaxy.


Each week the HEASARC brings you new, exciting and beautiful images from X-ray and Gamma ray astronomy. Check back each week and be sure to check out the HEAPOW archive!